Svadhishthāna Chakra is located two finger-widths above the Muladhara Chakra and to the lower belly, a few inches below the navel. “Svadhisthana” holds the energy related to money, relationships and demonstrates compassion and creativity. It corresponds to the sacral vertebrae and the nerve ganglion called the sacral plexus. This plexus hooks into the sciatic nerve and is a center of motion for the body.

It is often called the “seat of life.” It is connected with the sense of taste, (the tongue) and with reproduction (the genitals). Its element is water. Therefore, the chakra corresponds with bodily functions having to do with liquid: circulation, urinary elimination, sexuality and reproduction. With a balanced chakra you will have all these in good health while you will have difficulties in these with a imbalanced chakra. 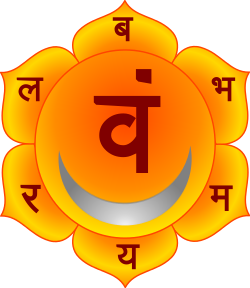 Inside this lotus is a white crescent moon which represents the water region presided over by the deity Varuna (god of water). The seed mantra, located in the innermost circle, is a moon-white वं vaṃ. Above the mantra that is within the bind, or dot, is the deity Vishnu. He is dark blue and wears a yellow dhoti. He holds a conch, a mace, a wheel and a lotus. He wears the srivatsa mark, and the kaustubha gem. He is seated either on a pink lotus, or on the divine eagle, Garuda. His strength is the goddess Lakini. She is black, dressed in red or white and seated on a red lotus. She is commonly depicted with one face and two arms, holding a sword and a shield, or two faced and four armed, and holds a trident, lotus, drum and vajra, or an arrow, skull, drum and axe.

Svādhishthāna Chakra is represented by ORANGE color which is also the colour for fire and denotes purification, activity, joy, hope and self-confidence.

The element (Tattva) of the Svādhishthāna Chakra is WATER. Like water, the Kundalinī energy rests in the Mūlādhāra Chakra stiff and motionless, as if “frozen”, and only begins to flow when it reaches the Svādhishthāna Chakra. We need to clear our thoughts and should think in a positive way once the energy starts to flow to protect us from the negativity of imbalance of the mind and other psychic disturbances like aggression, nervousness, restlessness, etc. The idea is to go ahead one step at a time.

The animal symbol of the Svādhishthāna Chakra is the CROCODILE. It represents the Karma lying dormant in the subconscious. The crocodile is lazy and lethargic, but once it becomes active it develops enormous power and speed and can be extremely dangerous. We also should set all our powers into motion when we have a strong desire or longing for something and  should continue with this practise even after we reach to our goal so to prevent ourselves to sink back into the earlier idleness.

The Bija Mantra, the subtle vibration, of the Svādhishthāna Chakra is VĀM. Through concentration on the sound of this Mantra and its inner repetition we are able to awaken the energy of the Chakra, and also bring it back into balance when it has become the victim of impetuosity.

There are two special “jewels” hidden in the Svādhishthāna Chakra that we are able to put to good use: ICCHĀ SHAKTI (willpower) and KRĪYA SHAKTI (vigour/drive). ICCHĀ SHAKTI and KRIYĀ SHAKTI can be awakened and strengthened by Yoga practices. The following powerful energies help us to cultivate these:

When these three Shaktis combine we are able to turn all our ideas, intentions and wishes into reality. Even though they are purely mental powers, they originate in the body. The free flowing of the Nādīs and the activation of the nerve centres (Chakras) play a big part in this, and Prānāyāma and concentration (eg Trātaka ) are also helpful. Concentration strengthens the mind and Prānāyāma strengthens and purifies the Nervous System. Here, purification means to remove blockages and thus improve and ensure the flow of energy. Concentration acts like a magnet on our consciousness pulling it in one direction only. Through this it is possible to utilise and guide the Prāna Shakti at will. With this our physical and mental nourishment also become very important. Therefore we should foster positive thoughts and only eat wholesome and pure food – no meat, fish, eggs or alcohol, and naturally no drugs.

To control and consciously guide Prāna is a science, similar to higher Mathematics. This energy is like an instrument with whose help we can attain our goal. When the nerve centres have been purified the Chetana Shakti, it develops its full potential and enlightens our consciousness. Once we have awoken this power within us we should also put it to good use, aligning it with our willpower and actions towards the goal of Self-Realisation.

In the course of our life the Kundalinī occasionally awakens and rises to the Svādhishthāna Chakra. However, here it comes up against the barrier of our negative qualities such as envy, desire, jealousy, rage and greed. These block the energy so that it again returns to the Mūlādhāra Chakra. And in this way the consciousness of many people continues to oscillate between the two lowest Chakras without ever being able to rise higher.

People influenced mainly by Svadhishthāna chakra are quite impressionable, have an active and vivid imagination, as well as the aptitude of verbalizing their perceptions, which makes them excellent in the professions involving guiding and healing.

Yoga to stimulate and balance energy flow through the Sacral Chakra:

One-Legged King Pigeon (Eka Pada Rajakapotasana) — This variation of the pigeon asana stimulates the abdominal organs while stretching the chest, shoulders, and abdomen.

Chair (Utkatasana) — Adopting this standing pose, which strengthens the abdomen and stimulates abdominal organ function, allows for the opening and activation of the Sacral Chakra.