What does Prana or Life Force mean?

As per Yoga there are two types of energy that are present in all beings: 1) Prana or the Life Force & 2) the Mind or Consciousness

Prana is thought to be responsible for maintaining all the physical functions of the body including life, heat & health. It means when one’s body has plenty of Prana, it is in perfect health & Vice Versa. One of the earliest references to prana is from the 3,000-year-old Chandogya Upanishad. The other Hindu texts including other Upanishads and Vedas have described similar ancient concept of prana. The concept is elaborated upon in great detail in the literature of haṭha yoga tantra, and Ayurveda.

The yogic practice of pranayama is one way in which the Prana energy can be sustained and enhanced. Pranayama is one of the eight limbs of yoga and is a practice of specific and often intricate breath control techniques. Many pranayama techniques are designed to cleanse the nadis, allowing for greater movement of prana. Deep meditation is possible through pranayama effectively. Yoga postures like cat pose, cobra pose, etc. are all thought to stimulate more life force and leave the yogi feeling energized. Life force is also considered to be the body’s natural healing energy. 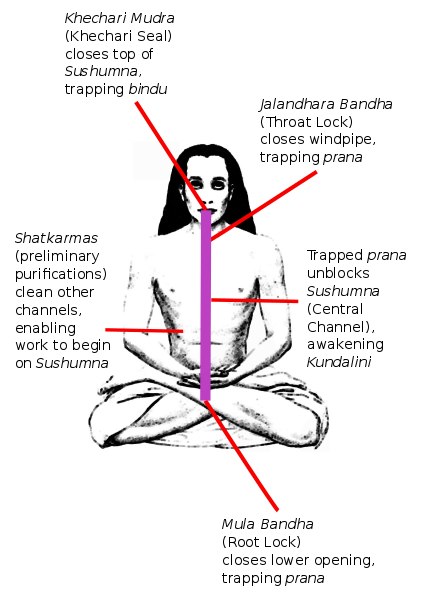 The image is a simplified diagram of the mode of action of Mudras and Bandhas on the Sushumna, leading to liberation in Hatha Yoga philosophy. The subtle fluids affected have numerous names including prana, bindu, and amrit.

Prana flows in nadis (channels). The three most important nadis are the Ida on the left, the Pingala on the right, and the Sushumna in the centre connecting the base chakra to the crown chakra, enabling prana to flow throughout the subtle body. 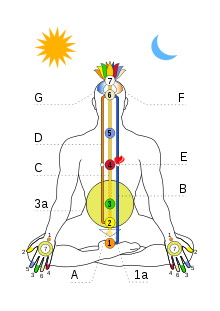 A simplified view of the subtle body of Indian philosophy, showing the three major nadis or channels, the Ida (B), Sushumna (C), and Pingala (D), which run vertically in the body

Though the antahkarana, the inner instrument, is one, yet it assumes four forms: i) manas, the thinking mind, ii) buddhi, intellect, iii) chitta, memory or consciousness and iv) ahamkara, ego, according to the different functions it performs. Likewise, though prana is one, it assumes five forms: i) prana, ii) apana, iii) samana, iv) udana and v) vyana according to the different functions it performs – this division is termed as vritti bheda.

Of these five, prana and apana are the chief agents. The seat of prana is the heart, its function is respiration; of apana, the lower abdomen to the anus, its function is excretion; samana, in the region of the navel, performs digestion; udana, in the throat, is responsible for swallowing and takes the jiva, the living being, to sleep, and separates the astral body from the physical body at the time of death; while vyana is all-pervading, it moves all over the body and is responsible for the circulation of blood.

Naga, koorma, krikara, devadatta and dhananjaya are the five sub-pranas. Naga is responsible for the functions of eructation and hiccup. Koorma performs the functions of blinking and opening the eyes. Krikara induces hunger and thirst. Devadatta is the prana which causes the action of yawning. Dhananjaya causes decomposition of the body after death.

The Sanskrit term Prana, often translated as “breath”, is considered the vital power of the Supreme Self that manifests everything in the universe and permeates all created things. This vital power is what gives rise to and sustains the incoming and outgoing rhythm of our physical breathing. The great sages of the Upanishads teach that by paying close attention to our breath, especially through a steady practice of meditation, we connect with prana. This vital power in turn, leads our mind into the luminous space of the Self, which is the Heart and essences of our being.

In Ayurveda and therapeutic yoga, pranayama is utilized for many tasks, including to affect mood and aid in digestion. A. G. Mohan stated that the physical goals of pranayama may be to recover from illness or the maintenance of health, while its mental goals are: “to remove mental disturbances and make the mind focused for meditation”.